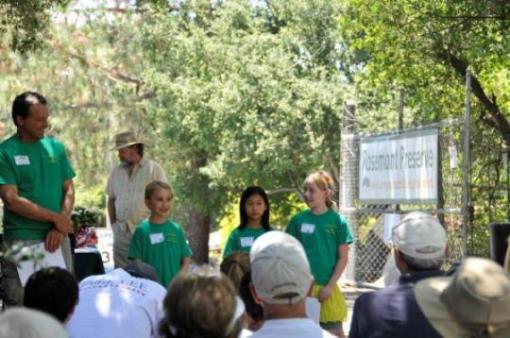 Ally Nielsen, Sara Chin and Jessica Carp of the Green Wishes address attendees at the celebration of the creation of the Rosemont Preserve. Photo by Tracey Alsobrook.

AFC celebrated the creation of the Rosemont Preserve with 75 supporters in La Crescenta on Saturday, June 30. The event included habitat restoration, docent-led tours, and a ceremony honoring those who supported the project.

AFC had completed the acquisition of the land, 7.75 acres located at the top of Rosemont Avenue in La Crescenta, earlier in the month. The conservancy is now in the process of creating a support group to help steward the land and lead programs for the local community.

The conservancy received $350,000 in funding from Los Angeles County for the project and an additional $100,000 from the local community, including major support from Desiree and Paul Rabinov, Henry Fliegel, Scarlett Hibner, and Wells Fargo.

“This is an example of how communities can improve by working with each other and working with their local elected officials,” L.A. County Supervisor Michael Antonovich told community members at the event. “You planted a seed, and you are watching it grow today.”

California Assemblyman Anthony Portantino, an AFC advisor, also spoke at the event, congratulating the community on its partnership with the conservancy. “You’ve heard of the little engine that could? Well, AFC is the little conservancy that does,” he said.

Thanks to all who have supported the project. For more information on the Rosemont Preserve, click here.