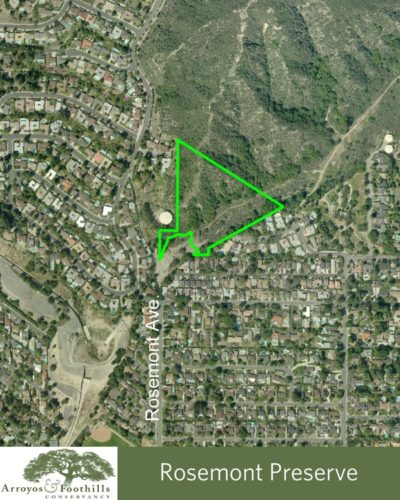 Thanks to a tremendous outpouring of support by the local community over the past week, the Arroyos & Foothills Conservancy (AFC) has now met its fundraising goal to create the Rosemont Preserve, saving an 8-acre parcel of wilderness space at the top of Rosemont Avenue.

AFC announced on May 14 that it was $20,000 short of the funds needed to acquire the land and secure it in perpetuity as open space. Since then, community members have given or pledged a total of $42,500. The excess funds will help provide for the long-term stewardship of the land and will allow AFC to begin planning programs for the local community immediately. From the beginning of the drive the community has generously contributed a total of $97,500.

“We let the community know we needed help and we got it in spades,” said John Howell, AFC’s executive director and general counsel. “We’re very fortunate to have such a dedicated group of conservationists in the Crescenta Valley, and delighted to have them as partners.”

A generous donation of $12,000 by La Crescenta resident Henry Fliegel brought AFC within striking distance of its fundraising goal, and a $10,000 grant by the Wells Fargo Foundation pushed the conservancy over the top. Then Scarlett Hibner of Flintridge donated $14,000 in order get the conservancy’s planned projects and programs on the property up and running.

Along the way, AFC received strong support from other members of the community. La Crescenta residents Desiree and Paul Rabinov pledged $15,000, and the Crescenta Valley Group of the Angeles Chapter of the Sierra Club and its members committed $5,000. The office of Los Angeles County Supervisor Michael Antonovich was responsible for securing $350,000 in county funding.

La Crescenta residents Steve Pierce and Paul Rabinov were invaluable in getting the community involved in the project. AFC is grateful for so many others who helped in a myriad of ways.

AFC extends a special thank-you to Assemblyman Mike Gatto and Assemblyman Anthony Portantino, both of whom were instrumental in securing the grant from the Wells Fargo Foundation. Portantino is an AFC advisor.

AFC will continue to work with the community to develop programs to restore habitat and create educational opportunities at the Rosemont Preserve.