If you want to get rid of rats in your house and yard, don’t use rat poison! While seemingly effective in killing rats, rat poison actually will make your rodent problem worse over time, not better!  That’s because rat poisons don’t just kill rats and mice.  They also kill all the animals that eat rodents.

The typical urban-area coyote, fox or puma will eat many hundreds of rats each year. Barn owls are documented to eat more than 1,000 rats a year.  By killing predators through secondary poisoning, we are actually making it far easier for rats to thrive in our neighborhoods. Raptors and mammal predators are far more effective at controlling rats than poisons. Don’t use any kind of rat poison!

When a rat eats anticoagulant-laced bait, it bleeds internally, which makes it thirsty.  So it goes outside looking for water. And dies. If that were the end of the story, everything would be fine. But a dying rat is easy prey and will probably  be eaten by a predator bird (owls, hawks and eagles) or by a rodent-eating mammal predator (coyotes, foxes, pumas and others).  If a predator eats more than a few poisoned rats, it will die.  What’s more, the dangers of rat poisons extend beyond predators. They can sicken and kill pet dogs and cats, and even children. 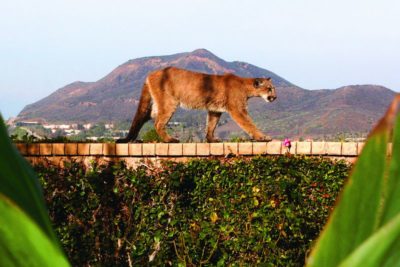 Sadly, as the Los Angeles Times reported recently,  (LA Times article), we lost one of the few remaining mountain lions living in Southern California, P34, who was not quite 2 years old. He died because he ingested rat poison.  P34 is not alone as an unintended victim of rat poison. Studies show that almost all predators (birds and mammals alike) in the Los Angeles area have ingested anticoagulant rat poison.  It is, by far, the leading cause of death of urban-area predators.

On a positive note next-generation anticoagulant rodenticides were recently made illegal for consumer purchase. We thought that by getting these poisons off the market, we would see a decrease in secondary poisoning deaths, but that has not occurred.  What has happened instead is that consumers are now under the impression that the rodent poisons available are somehow “safe” for wildlife. Poison is poison, and the rodenticides currently on the market are still lethal to both target animals and wildlife. Also, the more powerful second-generation anti-coagulants are still legal for pest control companies to use, so when someone hires a professional to deal with a rodent problem, they are putting those poisons right back into the food chain. Agricultural corporations can also still use these second-generation rodenticides (with the exception of certified organic food). Getting these more lethal poisons out of the consumer market was only a first step, the poisons still available are also lethal to wildlife.  For more information on click here: (Audubon article).

AFC is devoted to making the lives of all wild creatures in the San Gabriel Mountains a little easier by establishing, protecting, and enhancing wildlife corridors that provide safe passage between urban open spaces and the San Gabriels.  But all that work will go to waste if the remaining big cats and other predators are wiped out by the continuing use of rat poisons.