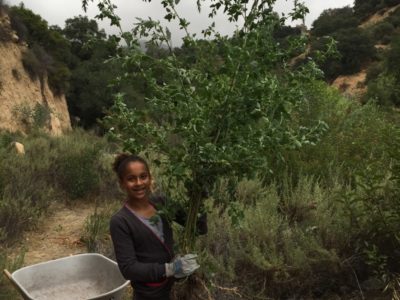 On May 22nd, students from Westridge School visited AFC’s Millard Canyon property to learn about how topsoil forms and about organisms that live in the soil and affect its fertility.  They also put in some volunteer work spreading mulch around some of the newly planted trees and over the invasive grasses on the hillside in order to reduce the fire hazard in the canyon.  They also removed some eupatory from alongside the stream.

Another group visited AFC’s Rubio Canyon property to remove invasive grasses and mustard to reduce the fire hazard there as well.  This is the 2nd year the Westridge 7th grade visited Millard and Rubio – both times as part of their soil unit studies.  A big thanks to Bill Ramseyer of the Meadows Fire Safe Council who led the Millard group and Tim Martinez, AFC board member, who led the Rubio group.