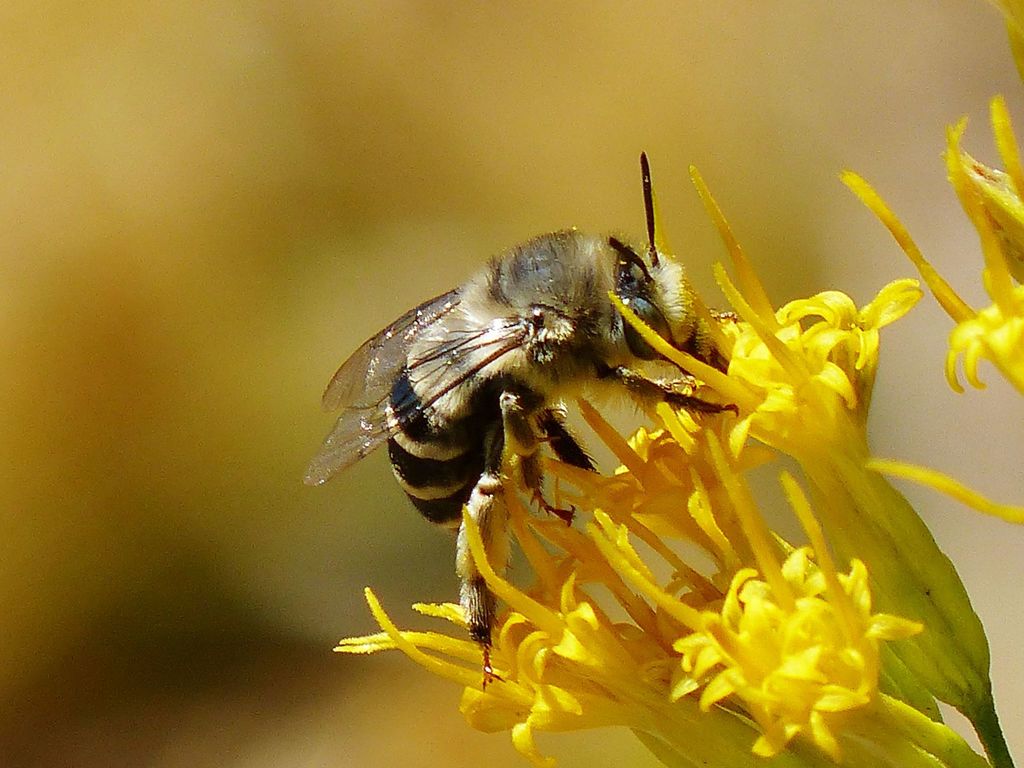 Bees are all around us in gardens and in the wild.  When you say “bee” to anyone the immediate thoughts usually go to Honey Bees or maybe Bumble Bees, and the recollection of a sting you received and didn’t feel you deserved.  The Honey Bees were delivered here from Europe, joining the nearly 5000 native species already here in North America, and they now provide a great deal of the pollination of our agricultural crops (measured in billions of dollars) and wild plants.  Bees are involved in pollinating about 70% of the world’s flowering plants.  Every hour of daylight, while we go about our business, bees are incredibly hard workers, focused on feeding, building nests for their young, and passing on their genes to the next generation (OK, they’re not generally “aware” of passing on genes, but that’s the result).

They have predators ranging from other insects to birds to lizards to bears (!) and more.  But their decline, alarming to Entomologists and Ecologists, is real and caused by humans in the form of habitat destruction, invasive plants, monoculture land use and pesticides.  Read on to see how many bee species there are locally, how they live and what you can do to study and help them.

Where did bees come from?

Bees originally evolved from wasps with the oldest bee fossil being 100 million years old.  Bees can resemble wasps but are usually more hairy with a more compact body structure than the less hairy and more elongate wasps. 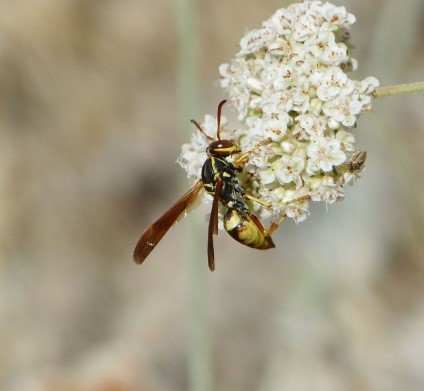 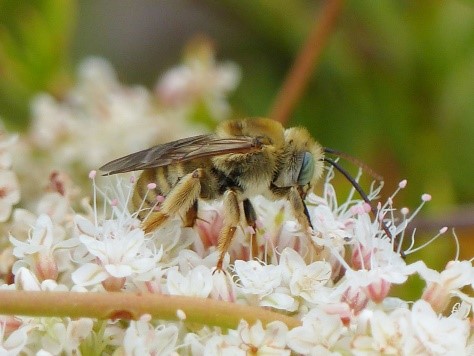 Which ones are native?

Bees are a great example of biodiversity: worldwide there are about 20,000 species; North America 5000; California 1600 (in 82 genera within 6 families).  Of the 1600 in California, just a handful are non-native: the well-known Honey Bee (Apis mellifera) and a Leaf-cutter Bee (Megachile apicalis) for example.  Most people pay no attention to the myriad of native bees all around them.  Researchers from U.C. Berkeley (2005-2017) have found over 400 species in 50 urban gardens in at least 15 cities around the State.  Our local Descanso Gardens in LaCanada-Flintridge harbored 112 species, in 28 genera within 5 families.  The highest number in the study!  Click here to see complete study.

One of several Bumble Bees in our area, this one’s an Endangered bee (Federal US Fish & Wildlife) often visiting Sages (Salvia sp.).  Virtually all Bumble Bees are declining.

A small but beautiful metallic green bee that visits a wide variety of flowers and nests in the ground, often leaving a dirt mound like an anthill.

A ground-nester, these bees, while solitary, may form colonies of several hundred to a thousand nests.  In addition to other flowers they are good at pollinating tomatoes.

Although not native, this is the most commonly-seen, familiar bee. An introduced social species that, unlike almost all native bees, makes hives and honey.

A large, hairy bee that digs nest tunnels into hard-packed soil and adds a tall turret of dirt (soil and saliva mix) perhaps to ward off parasites. May sleep inside a cactus flower.

One of our small bees, well under ½ inch, found on every continent and the largest bee genus with over 1800 species! They nearly all nest in the ground and may be attracted to human sweat for moisture.

Often a beautiful metallic blue or green, these bees will pollinate orchards and other crops and thus are economically important. Some Osmia species make their nests entirely of mud, thus “Mason Bee”.

Our largest bee, these burrow into wooden posts and decks to make tunnel nests.

Commonly nest in wood, carving tunnels or using pre-existing holes.  The leaf cutters cut circular discs from leaves to construct cells in nest chambers. They use hairs on face or under abdomen, rather than legs, to gather pollen.

Where do I go to see native bees?

Start with your own yards, especially if you have a diversity of flowers, native or not.  Go back to your local Arboretum (Los Angeles Arboretum) or Botanic Gardens (Descanso Gardens) and focus on flowering shrubs and herbs for bees.  Pause on your hikes at stands of flowers for a while and see what’s there.  Once you train your eyes, you will find native bees and other interesting insects.  The camera is the best way to bring bees home with you for study.

How do I find and identify native bees?

Bees can be a bit tricky to identify but you can start by standing still near a flowering plant and watching the movement.  Get to know the very common, slow-moving, orange-banded honeybees then watch for the often more rapidly-flying natives.  Some may be tiny, a few millimeters long, while others are similar in size to the honey bee.  A few giants, like the inch-long carpenter bees are easy to see (females black, males fuzzy orange).  Watch for color or pattern differences, metallic blues or greens, rings or not on the abdomen.  Again, the best way to “collect” them is to get good, close-up photos then study back at home.   This website can help match up your bee at least to family or genus.  Even if you don’t get a name for yours, you can marvel at the variety and think about the roles each plays in the environment.

Honey bees dominate our surroundings visiting a large variety of plants.  One has to train oneself to ignore the honey bees while looking for native bees and other insects at a shrub.

As a young naturalist (we’re talking late 1960s) my favorite hiking place, discovered with a friend, was the Arroyo Seco, San Gabriel Mtn. foothills, up the trail north of Jet Propulsion Laboratory.  Those days it was hunting up snakes, lizards and salamanders more than anything, but we kept an eye out for interesting flora and fauna of any kind.  One July 26th morning we came upon an old concrete box with 2 x 4 boards framing the top; something abandoned long ago.  We watched as 4 one inch-long female carpenter bees each buzzed in and disappeared into dime-sized holes in the wood.  Wow, how amazing!  Well named, carpenter bees use strong mouthparts to burrow into wood (dead tree stumps, boards, your house) and create branched tunnels.  We carefully shaved with our knife into the outer edge of the nest and saw the 13 neat, completed chambers sealed off, each with a larva or pupa developing, and the female still working.  (bee nest image, field notes)

After covering the exposed nest with a flat board we returned in early August to open it up again and see the progress: “very well developed pupae; black with wings close to fully developed.”  These carpenter bees are hard workers and driven to keep their kind going.  I can’t remember everything exciting that came along during our many Arroyo hikes, but when you have time to observe nature the rewards are great and lasting.

Studies show that blue, purple, violet, white and yellow are the favorite flower colors.  Bees generally do not see the color red, thus red flowers, especially tubular ones are pollinated by hummingbirds.  Bees can also pick up ultraviolet markings on flowers which we can’t see. 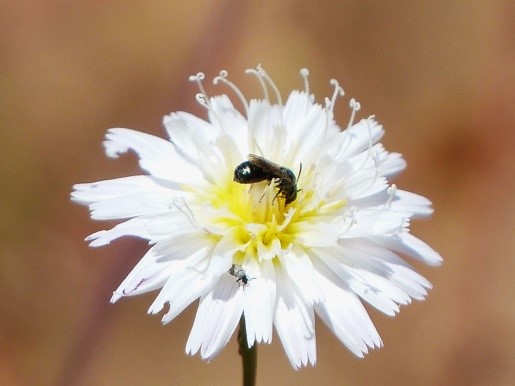 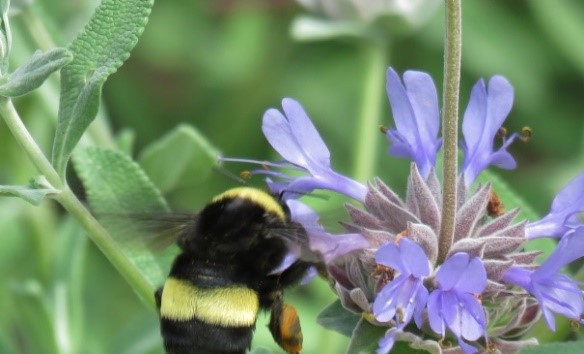 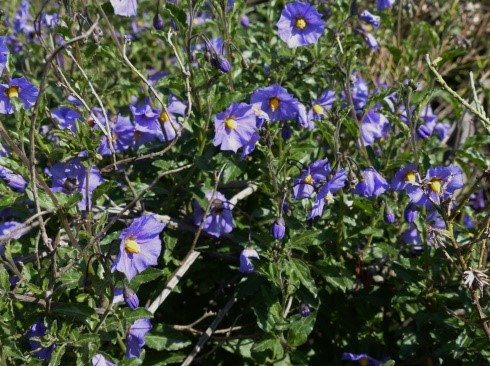 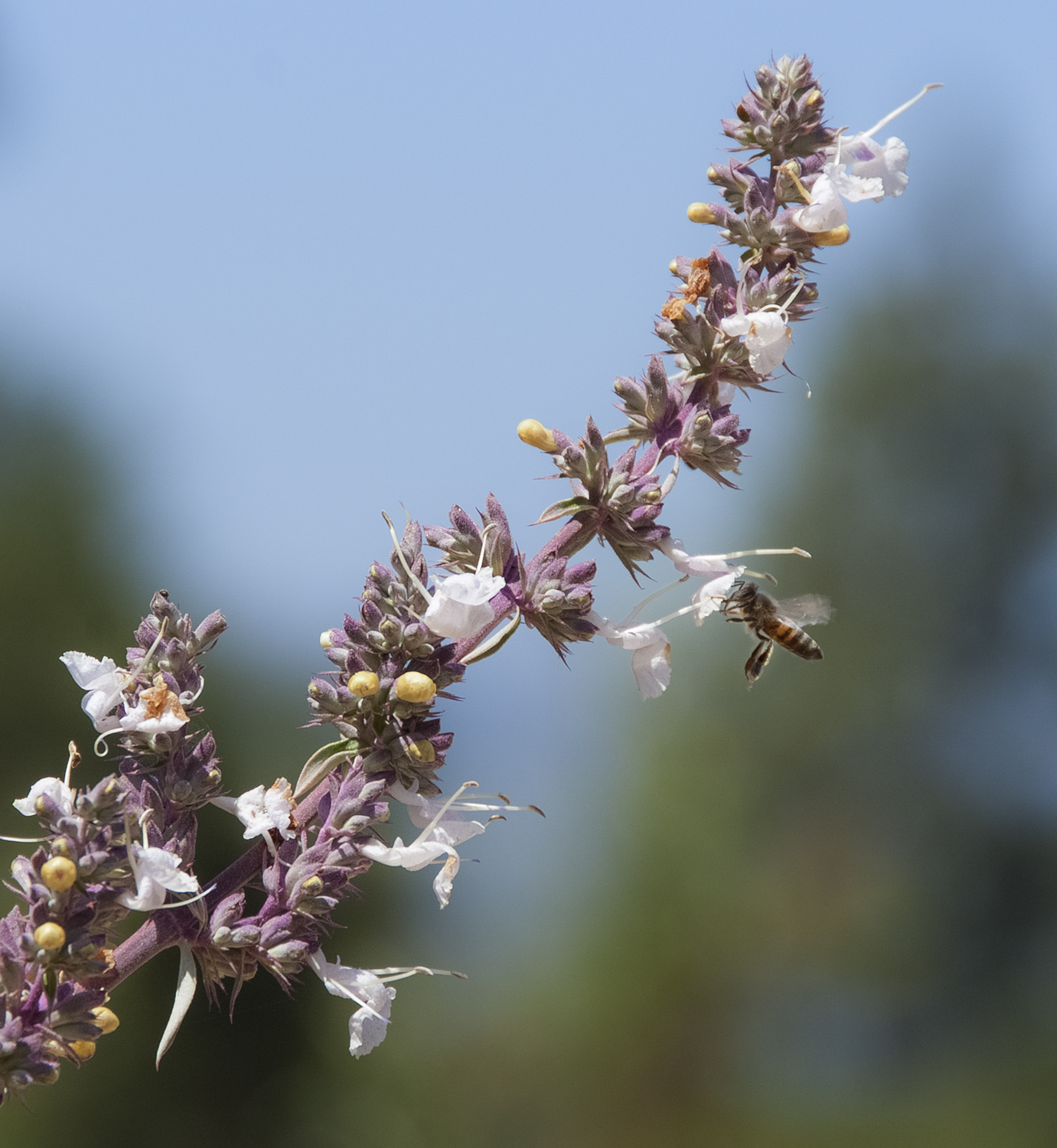 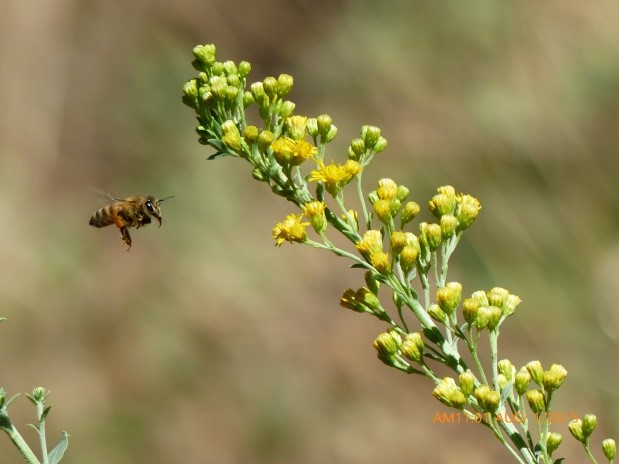 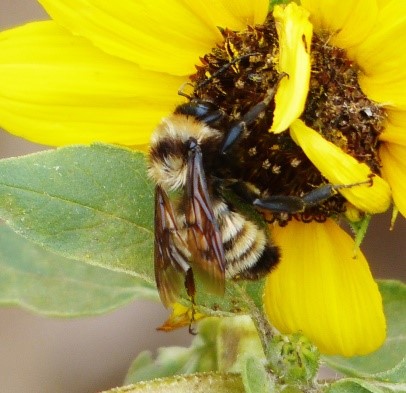 Only 10 percent of the world’s 20,000 bee species are social and even less live in hives.  The majority of our native bees are solitary; that is, they live individual lives and nest separately without a hive.  Some of these will nest in the ground, some in hollowed out twigs.  While they may cluster as a population in one site, each bee constructs its own nest and provisions it with food and lays its egg often sealed in individual cells.  Others, like the European honey bee, are social and have castes like a queen, many female workers and fewer male “drones”.  The workers toil to build the hive of wax (in California only honey bees and bumble bees produce wax) bring in pollen and make honey to feed the young larvae.  The males only mate with a queen and then die. 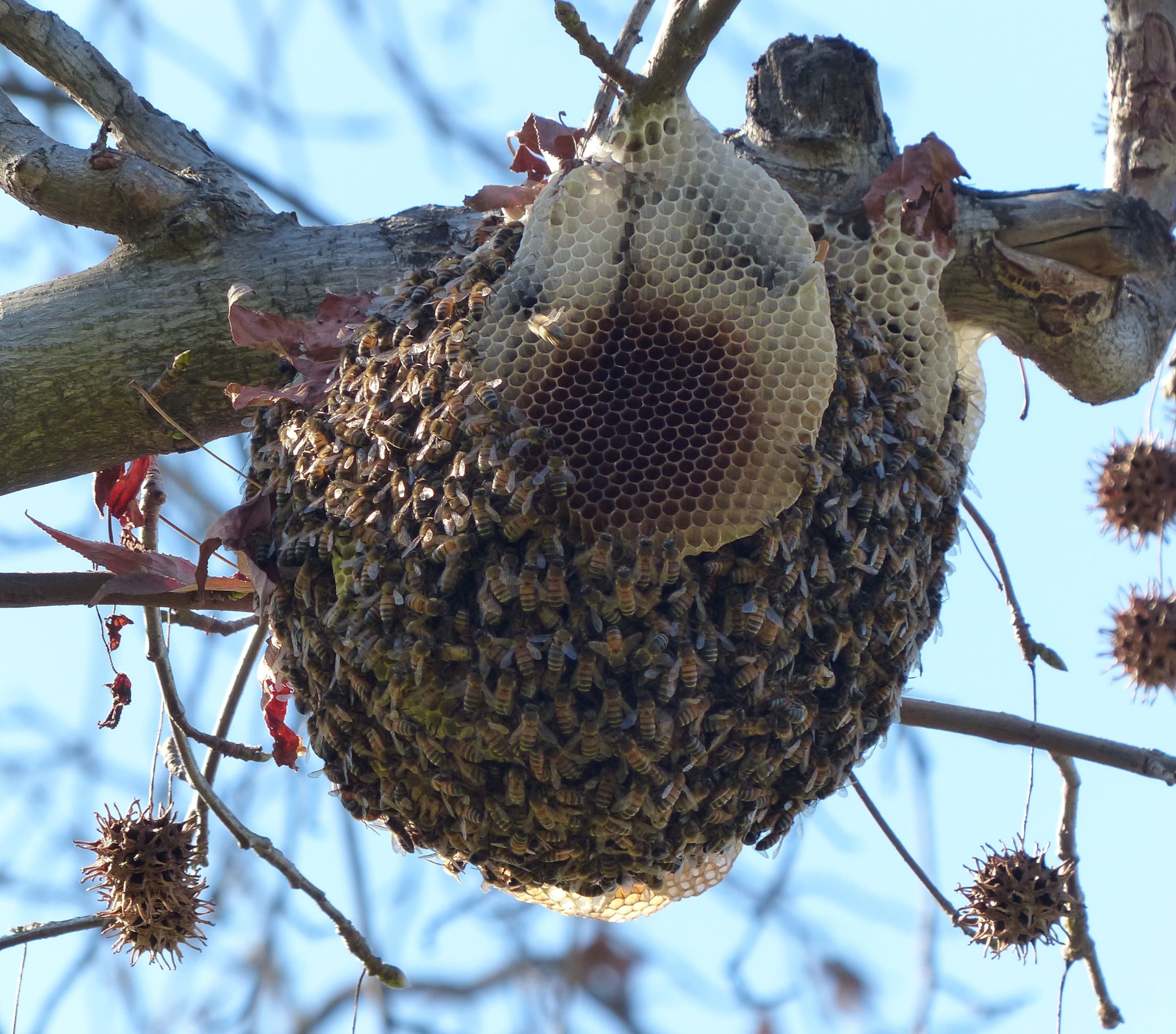 Honey Bee hive, Arcadia Park.
Often enclosed, this one is in the open 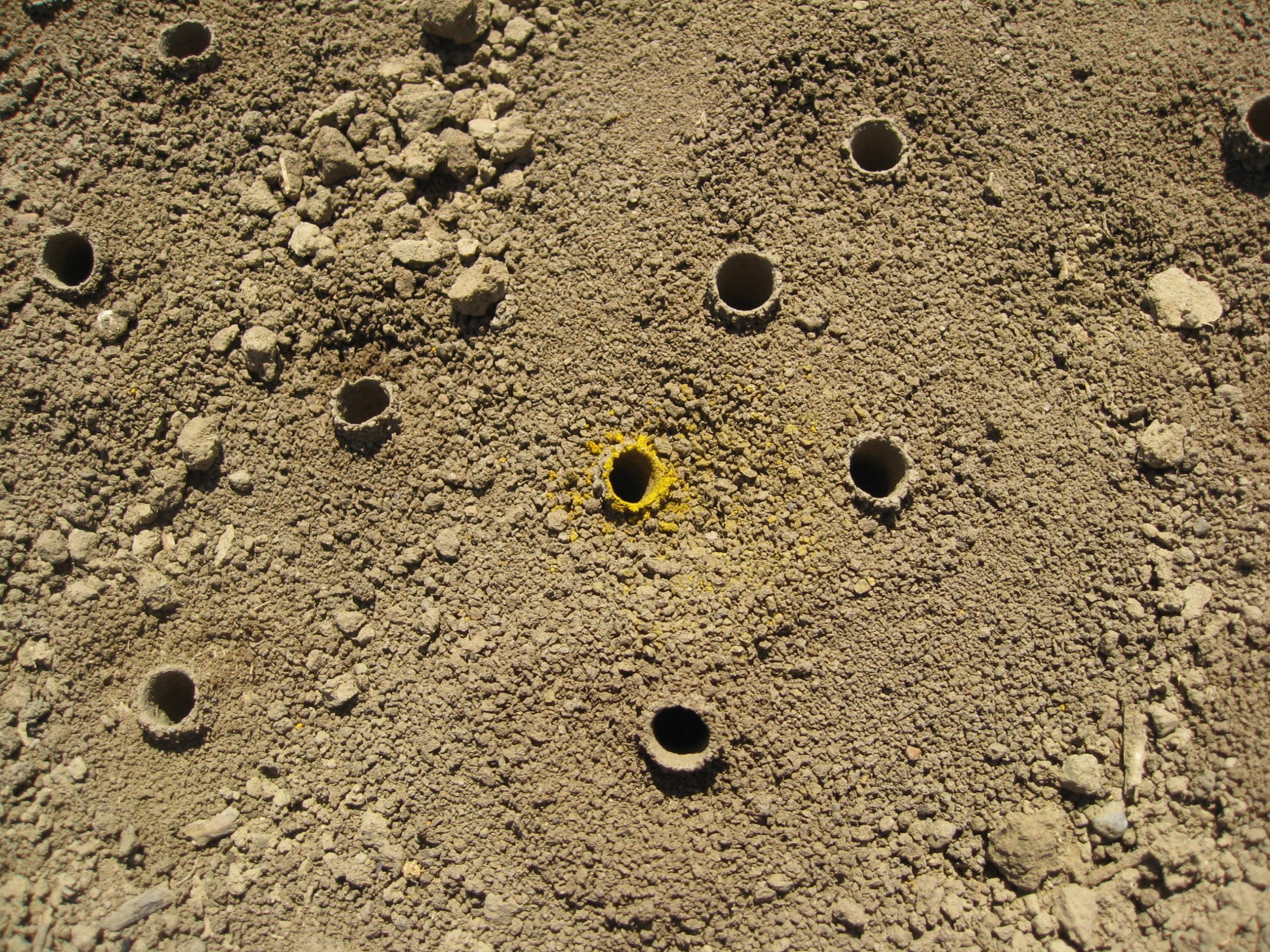 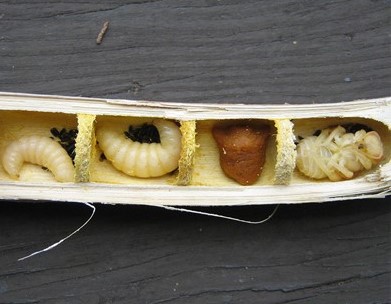 The decline of bee populations

Entomologists agree that bee populations are declining worldwide.  Bumble bee decline is particularly troubling as they pollinate crops like tomatoes, eggplant and other Potato family plants.  The European honey bee is suffering from Colony Collapse Disorder, for which the exact cause is still unknown, but contributing factors may be pathogens, pesticides, stress and malnutrition.  Click here to watch a video about the decline of bees.

Although rumors exist, there is mixed evidence that native bees are declining due to competition with the European honey bee.  Research indicates that interaction between honey bees and native bees leads to increased activity and efficiency of honey bees with regard to visiting (and pollinating) crops.  Native bees are actually more efficient pollinators than honey bees.  It is possible that reduced nectar from honey bee visits causes native bees to avoid some flowers, but apart from some territorial scuffling between male bees, native and honey bees seem to peacefully coexist.

How many bee species are endangered or threatened?

In the eastern U.S. the Rusty Patched Bumble Bee (Bombus affinis) was recently declared Endangered by the U.S. Fish & Wildlife Service along with three other bumble bee species.  Here in our area the Crotch’s Bumble bee (Bombus crotchii) is also Endangered (USFW). 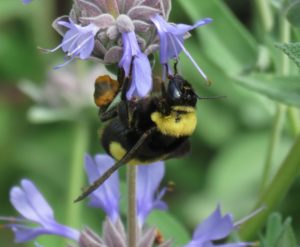 How is AFC helping?

Virtually all of these natives occur on our AFC preserves and we continue to help them out by restoring native plants and removing invasive non-natives.  We care about native pollinators since we want healthy, balanced natural ecosystems and since one out of every three bites of food we eat depends on pollinators.

How can I help?

Do not use insecticides or any pesticides in your yards.  Try to leave some bare dirt areas, free from plants or mulch.  Many native bees must nest in the ground and can’t access that if it’s covered.

If your garden is lacking in flowers plant some shrubs and spread wildflower seeds to focus on those that attract native bees.  From the bee garden researchers, here are some top California natives and a few exotics that bring in 10 to 20 species:

The cavity-nesting bees can chew their own nest burrows into softer woods or hollow or soft-pith twigs.  You might be able to attract them with pre-made tunnels.  You can buy bee houses already made from a number of sources.  Or you can make your own.  Download our guide here for instructions on how to make a simple bee house – or use your imagination to create an entire hotel!!! 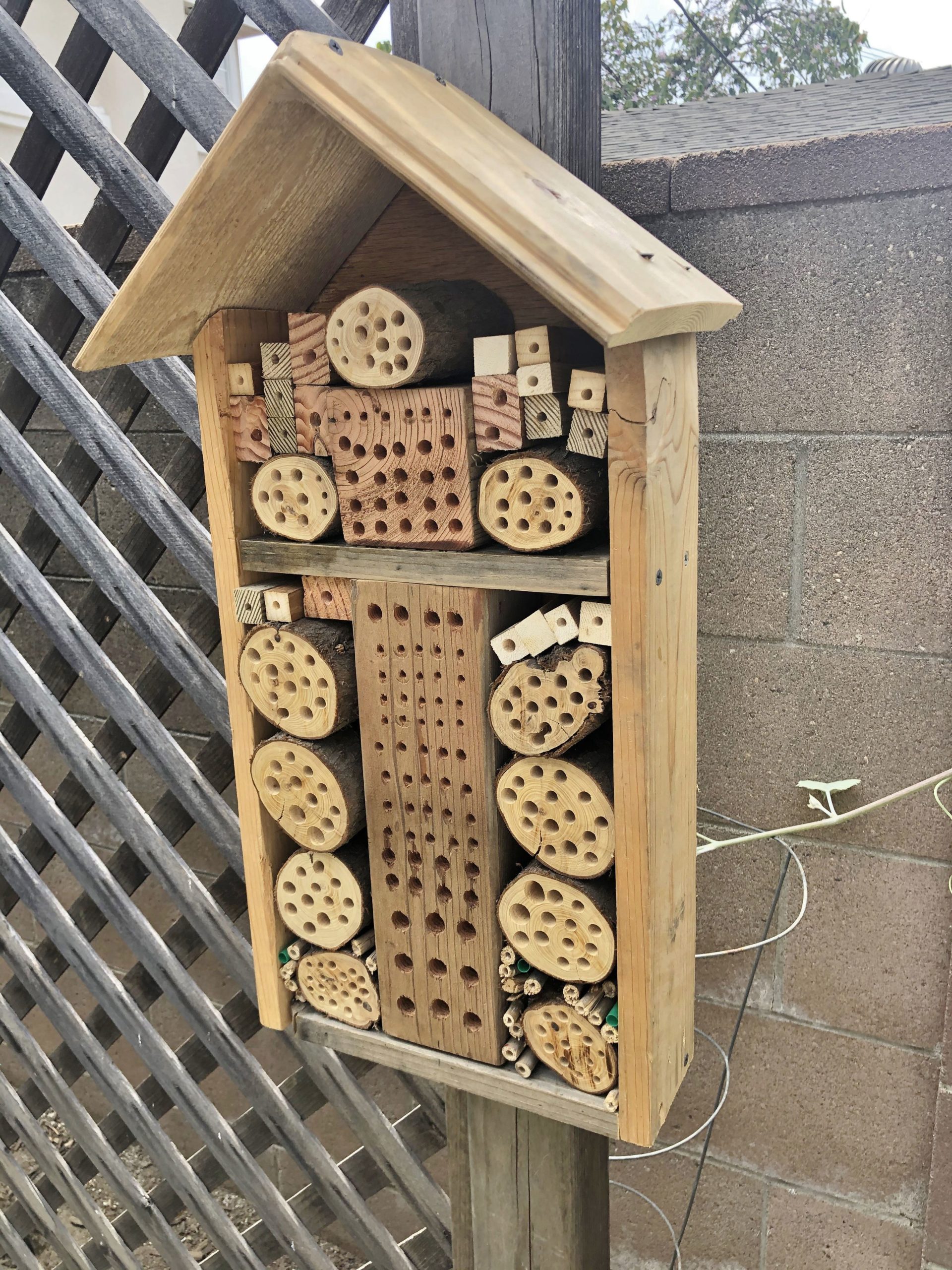 The Bees in Your Backyard: A Guide to North American Bees. Wilson, Joseph and Olivia Carril.  2016. Princeton Univ. Press.